Catania: the land of Myth

Catania is not just the second largest city of Sicily but it is a meeting point of ancient history and epic legends that date back to the times of the Myth.

Catania is not just the second largest city of Sicily but it is a meeting point of ancient history and epic legends that date back to the times of the Myth. 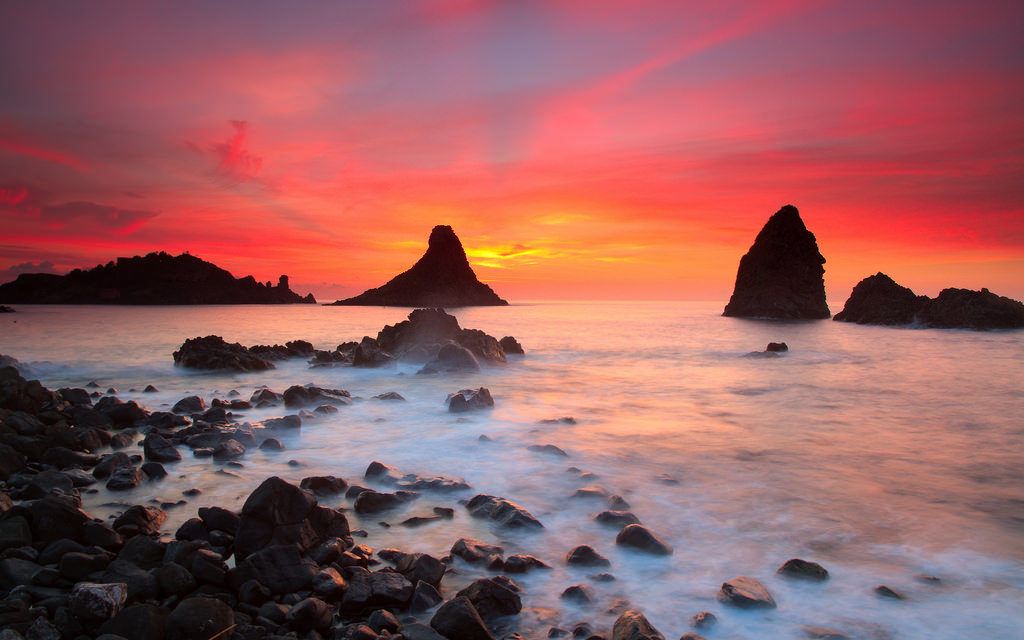 The history of Catania goes well beyond the Greek and Roman events and is closely connected to a wide range of legends and myths related to the native culture of Sicily.

The Mythology of Sicily

Have you ever wondered where Sicily Island, which was called Trinacria in ancient times, got its name?
The name originated from a Lebanese princess named Sicily, who once had to escape the terrible fate of being eaten by a cat-monster, by sailing through the sea to nowhere. The tedious journey came to an end when she luckily landed at a beach near Etna’s slopes.
However, the beach was not hospitable as it seemed, since it was deserted and lonely, which made her very sad. Luckily, a handsome young man appeared to her and comforted her; he explained that everyone had succumbed to a plague leaving him alone. The two later became fond of each other and by fate, got married with the aim of repopulating the land. Through this fruitful relationship, the area was named Sicily.

Polyphemus and the Rocks

Polyphemus, a Cyclops, was a man-eating monster that had one eye. The legend states that the monster once had an encounter with Odysseus and his companions, who had decided to reside at its cave. After being attacked and held hostage, Odysseus used his wits and got the beast drunk, which led to its defeat. The beast retaliated by throwing stones at them as they tried to escape. The myth explains why you will find rocks scattered all over Sicily.

This is yet another exciting myth explaining why freshwater springs are found in abundance in the Etna area. The Legend tells about a mermaid named Galatea, who fell deeply in love with a good-looking young shepherd named Aci. The relationship made Polyphemus, a Cyclops, jealous of Aci since he also had eyes for the mermaid.
The beast plotted an attack that resulted in the death of the shepherd. Out of love, the mermaid transformed its blood into a river that flowed to the sea. It is believed that this reunited the river spirit (Aci) and Galatea eternally, thus the source of Etna’s freshwater springs.

More myths and legends from Sicily.

There are many myths and legends that enrich the epic history of Sicily. The Strait of Messina, which separates the island from the Italian peninsula, for example, was the theater of the myth of Scylla and Charybdis. Scilla was a splendid nymph; when the God of Sea Glaucus fell in love with her, he asked the sorceress Circe a filter of love. Circe, in turn, fell in love with him and blinded by jealousy transformed Scilla into a monster with twelve feet and six heads. The monster hid in a cavern in the Strait of Messina, on the opposite side of Charybdis, another monstrous creature: both creatures terrified the sailors who were venturing into the Strait were terrified. The two sea monsters were portrayed in Homer’s Odyssey and in Ovid’s Metamorphoses.

Another myth described by Cicero, Ovid and Virgil and linked to the city of Syracuse is the legend of the Fountain of Arethusa. Arethusa was a beautiful nymph following Artemis. One day she was seen by Alphaeus, who fell madly in love with her. Not returning his love and wishing to be saved by the insistence of the young man, the nymph asked Artemis for help; so she was wrapped in a cloud that went to thicken and melt in a body of water. Alfeo instead asked the gods for help and was turned into a river that from Greece went to join his beloved through the Ionian Sea. The echoes of this myth still echo today at Fonte Aretusa, a stretch of water that flows into the Porto Grande of Syracuse.