beautiful scenery and decorated history are part of this adventure that goes from Rome towards Florence. The final destination is Perugia with a side trip to Assisi.

For this travel adventure, a weekend trip or a day trip, are the same. In fact, beautiful scenery and decorated history are part of this adventure that goes from Rome towards Florence. The final destination is Perugia with a side trip to Assisi.

To the country of Italy, Perugia is recognized as a place that makes chocolate. It is also the home of A.C. Perugia Calcio, the city’s principal football (soccer) club. The team is part of Serie B. Their stadium has 28,000 seats and it is called Stadio Renato Curi. While traveling through Perugia, it is highly recommended that you visit the recognized tourist hot spots. The tourist hot spots include; Palazzo dei Priori, Cattedrale di San Lorenzo, Basilica di San Pietro, Casa del Cioccolato Perugina, Rocca Paolina and Fontana Maggiore.

Scroll the gallery for more impressions >

After an exhaustive stay in Perugia, a side trip to Assisi is next on the list. Assisi is a city in Italy that is believed to have been founded during medieval times. As a result of this decorated history, Assisi is recognized as a central cultural point for Italy and Europe. In fact, the United Nations Education, Scientific and Cultural Organization (UNESCO), recognizes the city’s cultural significance to Italy and Europe. The city is also the birthplace of Saint Francis. The Basilica of San Francesco is a place that you have to visit during your stay in Assisi. 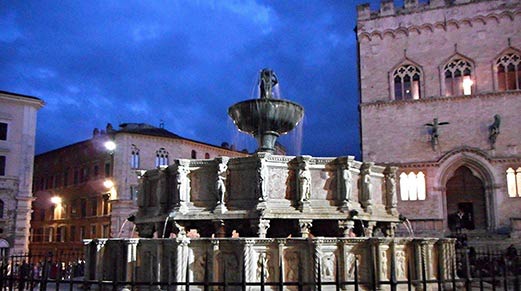