There are no less than 50 monumental fountains and hundreds of smaller ones in Rome making a total of over 2,000 - which is more than any other city.

There are no less than 50 monumental fountains and hundreds of smaller ones in Rome making a total of over 2,000 – which is more than any other city. They fell into disrepair when the Roman Empire fell until rebuilding started in the 14th Century, an initiative taken by Pope Nicholas V. The fountains of Rome are now a popular tourist attraction that have become a must-see.

Fontana di Trevi is one of the most popular ones in the world. It is a large, spectacular one that stands at 25 meters and is 20 meters wide, covering one whole side of Piazza Poli. The Pope’s Coat of Arms rises from the top and the balustrade is represented by four statues that symbolize the four seasons. The center has a large shell-shaped coach with two sea horses driven by two tritons pulling it. The basic has a majestic statue that represents the ocean. The fountain was immortalised in the1960 classic Fellini film La Dolce Vita. In the movie, actors Anita Ekberg and Marcello Mastroianni famously frolicked in the fountain. 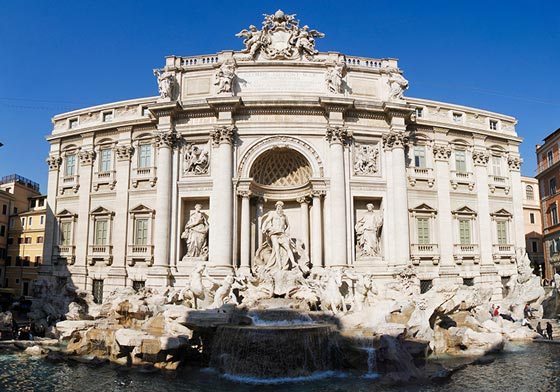 Fontana del Tritone or the Fountain of Triton at Piazza Barberini is another popular fountain. It dates back to 1643, when it was designed by Gian Lorenzo Bernini. It has dolphin’s tails that support the shell on which the fountain rises, and the Triton is crouched where the architect placed two Coats of Arms belonging to the Barberini family. There is a Triton that blows into the shell which spurts out a jet of water that falls on the valves that send it into the basin below. The result is magnificent choreography.

Bernini also left his mark at Piazza di Spagna with Fontana della Barcaccia, which stands in front of the Spanish Steps. It stands with quiet majesty spewing water out of a basin that represents a flooded boat. The Bernini design was inspired by the 1598 flooding of the Tiber where a small boat was stranded when the floods subsided. 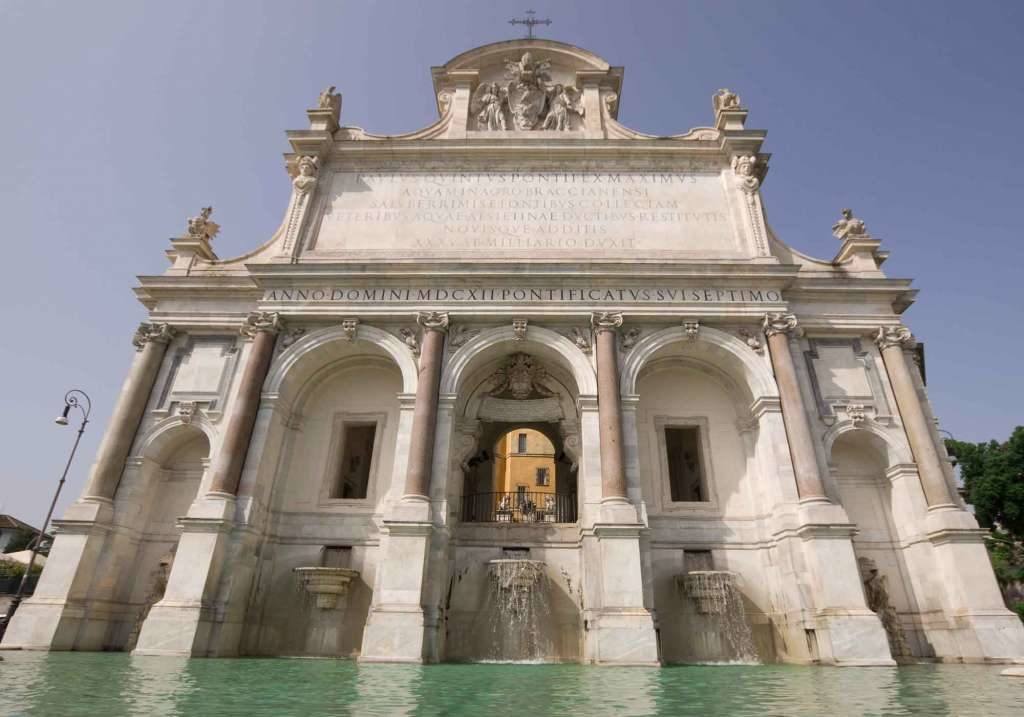 As you get close to St. Peter’s Square in the Vatican, you will hear the sound of trickling water. The sound will be coming from the two fountains of St. Peter’s Square, which stand on either side of the Obelisk. On the south side of St. Peter’s’ Square is the Bernini Fountain designed by Gian Lorenzo Bernini and commissioned by Pope Clement X. It took 10 years for the fountain to be built and the final result was well worth the time and effort.

On the left facing St. Peter’s Basilica is the Maderno Fountain designed by Carlo Moderno. Pope Paul V renovated the old Roman aqueduct in 1612 to give the fountain a large water source, and it was given the new name of Acqua Paola. With the reconstruction, the water pours down over the upper vasque when it flows from the top with light shining through it. The water came down a hill so that it can shoot upwards. In 1641, this fountain was named the most beautiful one in all of Europe by Theodor Ameyden, a Flemish lawyer. 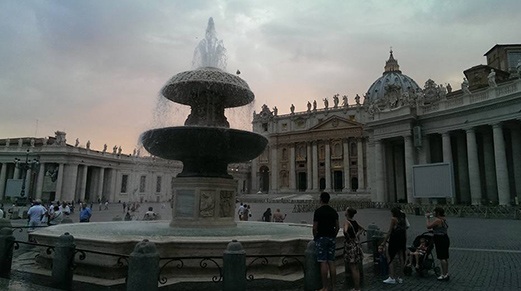 Piazza Navona, at the Stadium of Domitian where ancient Romans went to watch games, has a number of fountains. At the center is Fontana dei Quattro Fiumi or the Four Rivers Fountain…) also designed by Bernini in 1651. There is also the Fontana del Moro on the southern end that has a basin and four Tritons. In 1673, Bernini added the statue of an African Moor wrestling with a dolphin to the 1575 Giacomo della Porta fountain. On the northern end is the 1574 Fountain of Neptune, another Porta creation. The Antonio Della Bitta statue of Neptune was added in 1878 to make it even with the Fontana del Moro.

There are several other fountains in Rome that are worth a visit. Tours will often include them and when walking around the city, there will be many that you will find yourself pulled towards. 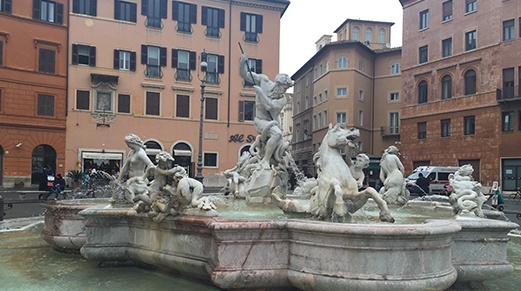