Discover one of the most impressive religious festivals in the world: the feast of Sant'Agata, patron saint of the city of Catania, is a unique mix of faith and folklore that every year involves hundreds of faithful.

Dating back centuries, from the 3rd to the 5th of February, the Sicilian city of Catania has been throwing one of the largest religious festivals held around the world. 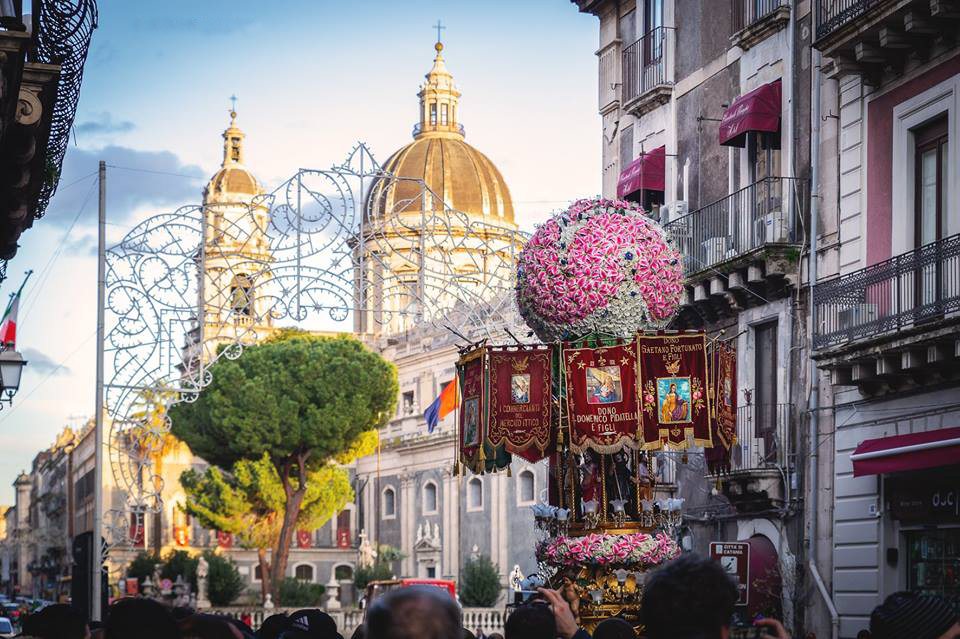 Honoring the heritage of its patron saint, Sant’Agata, the celebration is a grand feast combining both faith and folklore. It draws up to a million onlookers and devotees each year, where revelers pack the streets in honor of the young virgin Agata, whose story of faith, struggle, and martyrdom, can tug at any heart.

The History of Saint Agatha.

According to tradition, Agatha was a teenager from aristocratic heritage living in Catania, Sicily, during the first half of the third century. She was approached by a Roman prefect, and upon refusing his advances, suffered many tortures under his command. When she fought to defend both her faith and moral integrity, her captors severed her breasts. For this reason, images of Saint Agatha often show her holding her sliced breasts on a platter. And it is because of their shape that she is known as the patron saint of bell-founders.

Agatha was sentenced to be burned at the stake, but was saved by an earthquake. Instead, she died in prison around the year 250 A.D. at the age of 15, after having been blessed and healed by a vision of St. Peter the Apostle. Her body, showing little sign of decomposition, was found in the 11th century. According to local tradition, the year after her death, Catania was threatened by a violent volcanic eruption. When nearby villagers took the veil from her tomb to use it as a shield, it stopped the lava flow. She is now remembered for her miracles surrounding the earthquakes, Mount Etna eruptions and epidemics that affect Catania to this day.

In honor of Agatha, the city is beautifully lit up with fairy lights and crowded each year with locals and tourists for its breathtaking religious festival. Beginning on February 3rd, a long procession goes from the Church of Sant’Agata alla Fornace to the Cathedral, culminating in the offering of the wax rite. Eleven candles representing local guilds, two Senate carriages, and a smaller car carrying the city’s administrators mark the closing of the procession. That evening, a spectacular fireworks display goes off in Piazza Duomo.

On the 4th after Mass, the bust of Saint Agata is brought from the safe room inside the Cathedral in a silver carriage (which locals call the “vara”) and toured with a silver casket carrying other relics outside the old city walls. The crowd erupts in applause, sings religious songs, and the procession moves to the churches of Sant’Agata alla Fornace and Sant’Agata al Carcere. Another grandiose fireworks show is held that night. February 5th marks the festival’s peak, in which the cart leaves Piazza Duomo to slowly tour the city.

Following a dazzling fireworks display, the silver “vara” comes to the cross between the Quattro Canti and the San Giuliano slope. Here, thousands of townspeople participate in “la corsa del cordone,” a lively game of strength and endurance. After a race back to the Cathedral at the break of dawn – between exclamations of “Viva Sant’Agata!” – another round of fireworks goes off to welcome the Saint back to her resting place.