Ponte Vecchio, the oldest and the most famous bridge in Florence divide in two the city giving it a sense of continuity. The bridge remains always the dream of every tourist, with its romantic views over the Arno river.

Florence is divided in two by the Arno River, but the city’s charming bridges give the two sides a sense of continuity. All the bridges in the city of Florence have centuries of history, but the oldest and most famous is Ponte Vecchio (the Old Bridge).

The History Of Ponte Vecchio

This symbol of Florence, which was mentioned in Dan Brown’s novel, Inferno, has an intriguing history dating back to the middle of the first century BC when it was built. It was even rebuilt in 1345 after being completely destroyed by one of the most disastrous floods in the history of Florence. 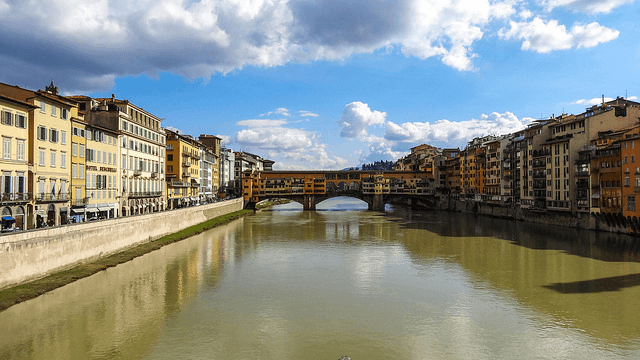 This was the first bridge to be built in Florence, and the only one built in the Roman era. It was originally designed as a defensive structure with four towers on each of the bridge’s four corners, but only one tower remains today. This bridge has stood the test of time, having endured numerous wars that span over hundreds of years to once again become the only bridge in Florence

It was the only bridge that the Germans spared when they retreated during World War II in 1944, and today travelers come from all corners of the world to see Florence’s Bridge of Gold. Modern tourists know the ‘Old Bridge’ for its renowned jewelry shops, but beneath all the gold and glitz the bridge has a unique and interesting story.

The history of the bridge may be long, but it wasn’t always so glamorous.

Once, the Old Bridge housed various shops including butcher’s shops, fishmongers, and tanners that were far from the illustrious jewelers that it is known for today. Waste was dumped into the river, causing a rank stench in that area, and the bridge was a place that most avoided if they could help it.

That all changed when the Medici family came to the city. They transformed the bridge into a place for respectable jewelers and gold. In an effort to improve the area so that they could use the bridge when getting around Florence, they decreed that only jewelers and goldsmiths were allowed to have shops on the Ponte Vecchio.

An Eternal Symbol of Florence

While the Medicis may be gone, the bridge still stands, as illustrious as ever. The shopkeepers there pride themselves on the high quality of their wares, and Italy’s gold jewelry purity standards are among the highest in the world.

Gold jewelry can be purchased anywhere, but when you buy your gold jewelry from Ponte Vecchio, you are not only buying a piece of jewelry, you are buying an experience.

Unfortunately, most shops on the bridge don’t have websites, which means that shoppers who like previewing the wares before their trip may be disappointed. To purchase their jewelry, you have to go into the shops themselves, but this only serves to make the experience even more memorable and unique.

It’s well worth taking the time to go around the shops and browse through their offerings. The piece that catches a shopper’s eye most likely can’t be purchased in any other place in the world. Ponte Vecchio is  few steps from the outmost famous hotels in Florence that are the perfect hub to explore this living example of Italian timeless love for beauty.